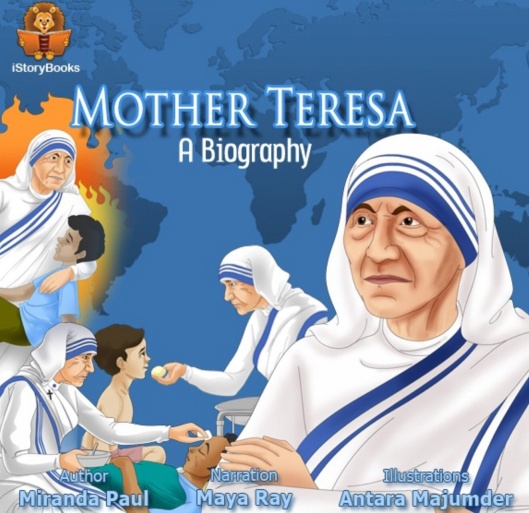 Mother Teresa is well-known around the world as a champion to the poor and needy, as well as for her kindness and selflessness. Introduce your child or students to her through this story of her life and deeds. Many know about her later years, but kids can better relate to her learning about her early years as well. Here is a summary of the story.

The story begins with some facts about the birth and first few years of Mother Teresa. Born as Agnes in what is now known as Macedonia, she was raised along with her brother and sister to be very giving. Her parents constantly emphasized the importance of sharing things with those who have less, and doing good without looking to be rewarded. It is this upbringing that helped her become the person she ultimately grew up to be.

After the death of her father in 1913, Agnes’s family became poor. When she reached her teen years, she decided to become a nun, and became known as Theresa. She was sent to India, there meeting many people who were very destitute.

She took care of the poor and weak, once even taking over the care of a blind baby. She then worked 20 years as a teacher, continuing her life of service to others. The story also showcases her braveness and strong-willed; she once left to find food during wartime, and went to help the poorest and neediest in Calcutta despite warnings of others.

In Calcutta, she not only helped the poor, but taught them as well, using any means necessary, even drawing in the dirt when writing implements weren’t available.

Soon other women were inspired to follow in her footsteps of caring for the sick who were turned away from the hospital. They continued caring despite ridicule from others. In time, as word spread of the good deeds of Mother Theresa and the other women, others began donating money. Soon help was able to be spread to other cities as well.

Her strong dedication showed that every little bit helps. Although her critics had said her work was small in comparison to how widespread poverty is in the world, she did not let that deter her, and instead countered that instead of adding up, she subtracts from the number of poor.

Six years after her death, mother Theresa was named a saint. Her message and group Missionaries of Charity had reached across countries and continents.

1 thought on “Summary of Mother Theresa”